Zum Inhalt springen
Please accept cookies to play this video. By accepting you will be accessing content from a service provided by an external third party.
Accept

The English landscape garden, also called English landscape park or simply the English garden. This drone footage video is the first in a series planned for the top ten English gardens. (French: Jardin à l’anglaise, Italian: Giardino all’inglese, German: Englischer Landschaftsgarten, Portuguese: Jardim inglês, Spanish: Jardín inglés), is a style of „landscape“ garden which emerged in England in the early 18th century, and spread across Europe, replacing the more formal, symmetrical jardin à la française of the 17th century as the principal gardening style of Europe. The English garden presented an idealized view of nature. It drew inspiration from paintings of landscapes by Claude Lorrain and Nicolas Poussin, and, in the Anglo-Chinese garden, from the classic Chinese gardens of the East, which had recently been described by European travellers. The English garden usually included a lake, sweeps of gently rolling lawns set against groves of trees, and recreations of classical temples, Gothic ruins, bridges, and other picturesque architecture, designed to recreate an idyllic pastoral landscape. The work of Lancelot „Capability“ Brown was particularly influential. By the end of the 18th century the English garden was being imitated by the French landscape garden, and as far away as St. Petersburg, Russia, in Pavlovsk, the gardens of the future Emperor Paul. It also had a major influence on the form of the public parks and gardens which appeared around the world in the 19th century. The English landscape garden was centred on the English country house.

The continental European „English garden“ is characteristically on a smaller scale and more filled with „eye-catchers“ than most English landscape gardens: grottoes, temples, tea-houses, belvederes, pavilions, sham ruins, bridges and statues, though the main ingredients of the landscape gardens in England are sweeps of gently rolling ground and water, against a woodland background with clumps of trees and outlier groves. The name—not used in the United Kingdom, where „landscape garden“ serves—differentiates it from the formal baroque design of the garden à la française. One of the best-known English gardens in Europe is the Englischer Garten in Munich.

The dominant style was revised in the early 19th century to include more „gardenesque“ features, including shrubberies with gravelled walks, tree plantations to satisfy botanical curiosity, and, most notably, the return of flowers, in skirts of sweeping planted beds. This is the version of the landscape garden most imitated in Europe in the 19th century. The outer areas of the „home park“ of English country houses retain their naturalistic shaping. English gardening since the 1840s has been on a more restricted scale, closer and more allied to the residence.

The canonical European English park contains a number of Romantic elements. Always present is a pond or small lake with a pier or bridge. Overlooking the pond is a round or hexagonal pavilion, often in the shape of a monopteros, a Roman temple. Sometimes the park also has a „Chinese“ pavilion. Other elements include a grotto and imitation ruins.

A second style of English garden, which became popular during the 20th century in France and northern Europe, is the late 19th-century English cottage garden. 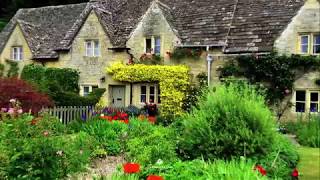 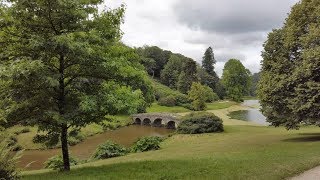 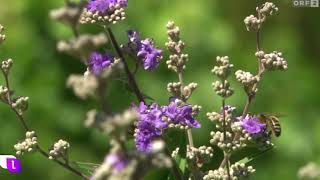 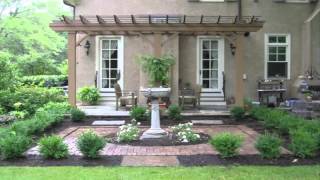 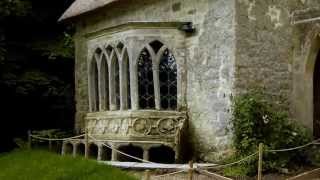